Who Would You Rather Fly With - Trump or Biden? 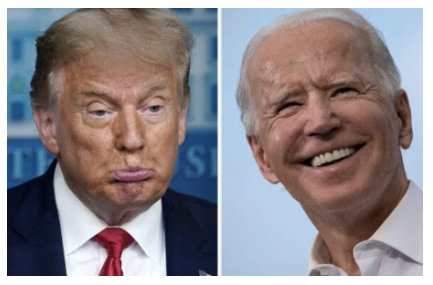 It’s been said that you don’t really know someone until you take a trip with them. But what if that person is one of the most recognizable people on the planet? Someone we all feel like we already know? And what if you’re stuck sitting next to them, five hours into a 13-hour flight and your Airpods die?

In other words, who would you rather be seatmates with on an international flight, Donald Trump or Joe Biden?

(Set aside the fact that neither of them will ever again fly commercial. In fact, let’s pretend that you’re both flying coach.)

So, there you are, crammed into seat 22B, with nothing to do and hours to go, bumping elbows with one of the most polarizing political figures in the world. You’ve heard him speak hundreds of times. You can confidently say why and how he earned your vote. You already know about his wife and kids, and you think you know what he thinks about every topic of importance.

But do you know what he’s like in one of the most uncomfortable circumstances common to modern life? Does he shove his Snickers wrappers into his seatback pocket? Does he walk into the lavatory wearing only socks? Does he snore, drool, or skyfart?

Whether you’ve got “Resist” tattooed on your eyelids or you remove your MAGA hat only for haircuts and showers, be honest: would you rather share a long flight with the conductor of the Trump Train, or snack on a Stroopwafel while ridin’ with Biden?

We took the liberty of imagining some of the pros and cons for each to help you make up your mind.

Pro: Friendly and familiar, instantly strikes up a conversation.

Con: Raises the armrest without asking.

Con: Talks over the flight attendant during the seatbelt spiel. You feel certain he has no idea how to open the emergency exit and will ask you to help him with his oxygen mask.

Pro: Not going to judge you for your unhealthy snacks.

Con: Brought a sack of Big Macs on the flight. Doesn’t share. Sky-farts.

Con: The flight attendant assumes you’re with him and ignores both of you for the rest of the flight.

Pro: A notorious germaphobe, he keeps his seat and tray table very clean and keeps his shoes on for the entire flight. He definitely wears shoes in the lavatory.

Con: Keeps glancing at you and grimacing, as if you are contaminated.

Pro: Brings several family members with him and asks you to trade seats, so now you don’t have to sit next to him or sit in the middle seat.

Con: Now you have to sit next to Ivanka, who spends the whole flight telling you about how tough it is to be a “working mom.”

Pro: He also brought Melania with him and she can communicate with all neighboring passengers using all of her five languages.

Con: She tells everyone her unfiltered thoughts on Christmas. In five different languages.

Con: Chatty AF. He literally won’t shut up, and he starts every story with, “One time, Barack and I…”

Pro: Tells you all about his dog.
Con: He brought the dog with him, claiming that he needs it for emotional support after the trauma of the campaign and transition. The dog is under the seat in front of him and is currently licking your ankle.

Pro: No fear of flying. Genuinely seems to enjoy it.

Con: Wears aviators for the whole flight and insists on meeting the pilot. Proudly wears the plastic wings pin normally reserved for children.

Pro: Insists on sharing his headphones and movie with you.

Con: He’s watching “Love Actually.” Over and over again.

Pro: Doesn’t mind you turning on the reading light.

Con: Reads your book over your shoulder and makes comments. Keeps interrupting to ruminate on whether or not he should buy the zombie sculpture from SkyMall. Says he thinks it would be “a hoot” in the Rose Garden.

So, who would you rather fly with? Regardless of your choice, in these divided times we can probably all agree that if we have to travel with either of them, we’d much rather fly than drive.